While blockchain technology has only become synonymous with recent methods in financial assets management it’s applications are largely unlimited. But redistributing accountability for information into this new democracy poses new problems and practicalities, especially for the security conscious.

In this short edition we will explore the underlying concepts of blockchain technology, practical elements of what makes a blockchain and look at the inherent vulnerabilities of a decentralized network in the real world.

The Cryptography Behind Blockchain

The goal of the blockchain is to create a distributed, decentralized, and trusted record of the history of the system. The most famous blockchain, Bitcoin, uses this record to store the history of transactions, so people can make and receive payments on the Bitcoin blockchain and trust that their money won’t be lost or stolen.

In order to achieve this level of trust, the blockchain uses a couple of cryptographic algorithms as building blocks. Hash functions and public key cryptography are crucial to both the functionality and security of the blockchain ecosystem.

A hash function is a mathematical function that can take any number as an input and produces an output in a fixed range of numbers. For example, 256-bit hash functions (which are commonly used in blockchain), produce outputs in the range 0-2256.

In order to be considered secure, a hash function needs to be collision-resistant, this means that it’s extremely difficult (to the point of being nearly impossible) to find two inputs that create the same hash output. Accomplishing this requires a few different features:

In public key cryptography, everyone has two different encryption keys: a private one and a public one. Your private key is a random number that you generate and keep secret. It is used for decrypting messages and generating digital signatures.

The security of public key cryptography is based on two things. The first is the secrecy of your private key. If someone can guess or steal your private key, they have complete control of your account on the blockchain. This allows them to perform transactions on your behalf and decrypt data meant for you. The most common way that blockchain is “hacked” is people failing to protect their private key.

The other main assumption of public key cryptography is that the algorithms used are secure. Public key cryptography is based off of mathematical “hard” problems, where performing an operation is much easier than reversing it. For example, it’s relatively easy to multiply two numbers together but hard to factor the result. Similarly, it’s easy to perform exponentiation but hard to calculate logarithms. As a result, it’s possible to create schemes where computers are capable of performing the easy operation but not the hard one.

How Blockchains are Put Together

As its name suggests, the blockchain is a collection of blocks that are chained together to create a continuous whole. In this section, we explore how this works. 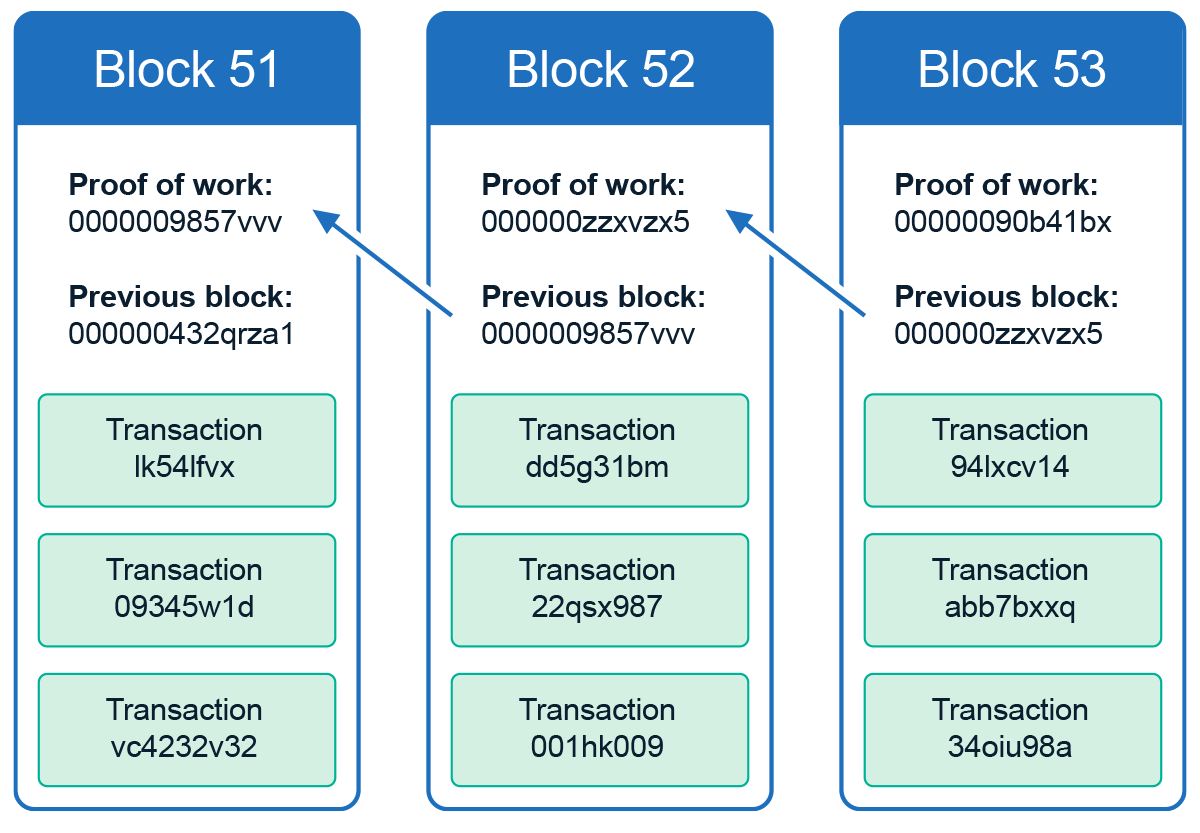 The purpose of the blockchain is to act as a distributed ledger that stores data in a secure fashion. The blocks are the place where this data is stored.

The image above illustrates the basic structure of a block in a blockchain. We’ll talk about every part of this image throughout the series, but for now focus on the green sections. Each green piece represents a transaction within the block. While a transaction may represent a literal transaction (i.e. a transfer of value) on blockchains like Bitcoin, this is not the only option. As we’ll see later, smart contract platforms store other things (like computer code) as transactions as well.

The security of the blocks in the digital ledger depends on the security of public key cryptography. Every transaction and block in the blockchain is digitally signed by its creator. This allows anyone with access to the blockchain to easy validate that every transaction is authenticated (i.e. sent by someone who owns the associated account) and has not been modified since creation. The integrity and authenticity of the blocks in the chain is also assured by the digital signature of the block creator.

Each block is equivalent to a single page in a bank’s account ledger; it only represents a slice of the history of the network’s history. In order to combine these slides into a continuous whole, the blockchain makes use of hash functions.

In the image above, you can see the hash functions linking each block together. Each block contains the hash of the previous block as part of its block header (the section not containing transaction data).

The fact that every block is dependent on the previous one is significant because of the collision-resistance of hash functions. If someone wanted to forge block 51 in the image, they have two options: find another version of block 51 that has the same hash or forge every block after 52 as well. The first is supposed to be impossible (due to collision resistance) and the other should be difficult or impossible since the blockchain is designed to make forging even a single block difficult (more on this later).

The security of the “chain” part of blockchain is based upon the collision resistance of the hash function that it uses. If someone can find a way to generate another version of block 51 that has the same hash, the immutability assumptions of blockchain break down and you can’t trust that any transaction will remain in the distributed ledger.

At this point, we’ve covered the fundamental cryptographic algorithms and data structures used in blockchain. The next two articles in this series are focused on the infrastructure behind the blockchain: the nodes and how they’re networked together.