Traditional network services work on a client-server model. To access the shared resource, you (the client) connect to a server and request the official version of the file. This makes synchronization easy (since the server knows the most recent version) but is very centralized. This can be problematic because it requires trust in the server and the server is vulnerable to Denial of Service (DoS) attacks.

Blockchain is designed to be a completely decentralized system. Every node in the blockchain network has the ability to keep a copy of the distributed ledger, and the the official version of the shared ledger is updated via blockchain consensus mechanisms (covered in detail in the fourth section of this series).

What Do Nodes Do?

Nodes are a vital part of the blockchain ecosystem because they’re the ones that do everything. As a decentralized peer-to-peer system, everyone acts as a combined client and server. As a result, the duties of nodes are protocol-specific (rather than software-specific) and numerous. 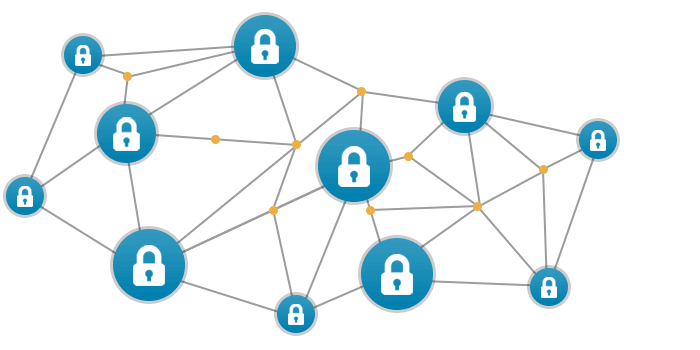 Like many other Internet applications, a blockchain is a protocol rather than a specific piece of software. Instead of mandating that everyone run the same executable to use a service (like Skype), the only requirement is that nodes communicate based upon the rules of the service.

An example is HTTP, the protocol that defines how websites work. The structure and ordering of packets on the network is defined by the protocol, but no-one cares which software you’re running. As a result, there are a couple of different web servers (Apache, IIS, etc.) and many different web browsers (Chrome, Firefox, Safari, etc.). These servers and browsers have agreed to follow the protocol, so they’re able to communicate with one another with no issues.

Some blockchains are implemented using different software, while others have only one. When choosing blockchain software to run, it’s always a good idea to cross-compare the options.

The purpose of the node is to implement and operate the blockchain. Each node has the ability to store a complete copy of the distributed ledger, and, if they do, to update it based upon the consensus of the network as a whole. As a result, nodes can participate in a variety of activities including transaction processing, block creation, and ledger management.

One of the most common tasks that nodes have is transaction processing. Anyone connected to the blockchain network through the node will send their transactions to the node to be added to the distributed ledger. The node is responsible for sending these transactions on to the rest of the network as well as forwarding on any transactions that it receives from other nodes to its peers in the network.

The blockchain is updated by adding new blocks to the existing chain. These blocks contain the data stored on the distributed ledger, and someone needs to collect this information into the block and distribute it to the rest of the network. Since there is no centralized server in blockchain, this means that the nodes are responsible for this as well. Using a blockchain consensus algorithm, a node is selected as the next block creator. They perform the tasks of creating the next block and starting its distribution (and are rewarded for their trouble).

The role distinctions in the blockchain network aren’t even as simple as node and not-node. In some cases, it’s possible to have different types of nodes. For example, Hyperledger permits a huge amount of role specialization, allowing nodes to only do the portion of the work that they are most suited to.

One of the more common distinctions between nodes on the blockchain is full and lite nodes. As their name suggests, full nodes perform all of the job roles associated with being a node. These guys store a complete copy of the ledger and participate in consensus and block creation. A blockchain network needs a certain critical mass of full nodes in order to maintain its security and decentralization.

Lite nodes are designed to make it easy for someone to perform and verify transactions without doing everything that a full node does. In the previous post in this series, we talked about how the block headers are “chained” together using hash values. Since these headers summarize all of the transactions contained in a block, they are all you need for verification of blockchain integrity. Lite nodes download the headers and only request the actual transaction data if they want to verify that a certain transaction was included in the block. This reduces the storage and communications requirements of lite nodes at the cost of a bit of decentralization.

Nodes are the targets of most attacks on blockchain networks. While other attacks may have more name recognition (like 51% attacks), many attackers have found that it’s more profitable to target the individual users. Some threats at the node level are security misconfigurations, phishing, and malware.

Security misconfiguration vulnerabilities occur when users modify the settings on their blockchain software without understanding the potential impacts. One example is a setting on a common Ethereum client that allowed external applications to communicate with wallet software via Remote Procedure Call (RPC). Attackers scanning for port 8545 were able to connect to the software and steal $20 million in Ether.

Phishing attacks are also extremely common for blockchain users. The Electrum wallet is especially known for being a target of phishing attacks, with over $1 million in Bitcoin being stolen by just one attacker in a matter of hours.

Finally, malware can be used on blockchain nodes for a variety of different purposes. Many of the attacks described in the remaining articles in this series can be performed using malware that targets the blockchain software on a node.

If you run a node on the blockchain, its security is completely under your control. Taking the appropriate steps to secure it like installing antivirus software, properly configuring it, and being aware of phishing scams can make a huge difference for your security and that of the blockchain network. The decentralization of a blockchain network makes it more difficult to defend against certain network-level attacks, but every secure node contributes to the health and security of the network.